All I did was ask if there was a “straight pride” flag, because I couldn’t find one and if not why not. 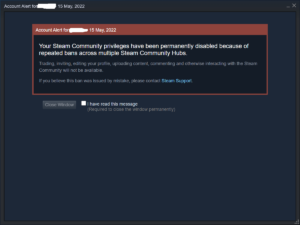 In Russia people get arrested for holding an empty piece of paper. In “The West” people get permabanned for asking a gender question.

We’re not far off from everything you hate about Russia. Same shit – different color.

And now it seems I’m even shadow banned on Youtube ?!? What the hell is going on?

I’m having trouble sleeping since the ban. Because of this corporate capitalist faschism. You go on a forum to ask a question, the whole purpose of a forum is communication and you get banned for attracting too much attention with that question.
Also when you visit the Fallout 76 forum on Steam you get a NFSW warning shown. 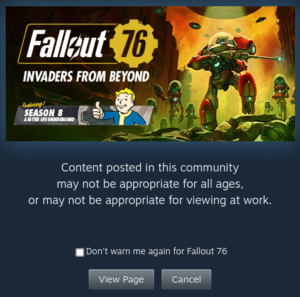 An account that turned 16 years of age about a month ago.

I was once banned from the Meridian 59 forum on Steam because the moderator there thought I was some person who had been stalking him.
I appealed the ban but even in the completely clear case that I was wronged the woman, what was her name, Lilly? Anyhow she refused to lift the ban and said that something along the lines of “the moderator is always right and doesn’t have to justify their actions”. That ban was part of a previous ban that lead to a 1 year Steam ban, despite that the Meridian 59 ban was removed by the moderator when I contacted him outside of the Steam forum.

For arbitrary Valve this doesn’t matter.

Of course the Fallout 76 forum ban wasn’t the only reason, you need to accumulate more than 1 forum ban for a “Steam Community” ban. In this case it was 2 bans. I wonder how many people got unjustly banned as well?

The other Steam forum ban was in the “Heroes & Generals” Steam forum about a day ago and about a week after I created the thread there.
You see I spent over 300€ buying gold, a premium currency in H&G.
That was when warbonds were still a part of the game and you could buy a warbond for 80k gold, the equivalent of 400€ and receive a monthly payout that was slightly more than the price of a monthly subscription. So effectively a lifetime subscription. Only they didn’t advertise it as such.
However they lied about the reasons why they removed warbonds, they claimed the EUGDPR was  the reason for it, a complete lie.

Lately the company running H&G renamed itself and forced all players to use either the Steam or Epic clients if they wanted to play. The untracked client was disabled. They wanted the numbers to show how many players played that game. The numbers increased by approx. 16% or about 200 players on average over the almost 3 months this decision was active. But in May 2022 they started dropping and increasingly dropping every day.
Since I got cheated by that company with the removal of warbonds I created a thread making fun of that fact and also wrote that this lying company doesn’t deserve even that many players. A week later I was banned from that forum on Steam.

Then I played Fallout 76 because I was in the mood for some Fallout and noticed there was a new flag, the “I feel sickly” flag. I didn’t like that flag and sought to replace it. There were a bunch of flags available for selection, among them many “sexual pride” flags, like asexual pride (is that even a thing?) pansexual pride (I don’t understand what that is), non-binary pride (?!?), gay pride and lesbian pride and idk what else but no heterosexual / straight pride.

But I’m straight, a heterosexual and if those other sexual orientations get to be proud or display their pride, why can’t I? So I thought maybe it’s an oversight and asked in the Fallout 76 Steam forum if there was a “stright pride” flag and if not why not? I’m sorry if I don’t follow the latest trends anymore. I’m 47 and work most of my time and when I don’t work I write forum posts or post on social media because I live a very lonely life (or play games with preferrably cooperative people).

Well, it wasn’t the 1st time I was banned from the Fallout 76 Steam forum. Last time I was killed in game by at least 2 cheaters who used a cheat tool to kill me. I posted about that circumstance and got banned for naming one of the cheaters. I believe I also blogged about that on this blog. That ban was also part of the reason of a 1 year ban on Steam.

So this overzealous Fallout 76 mod is responsible for 2 Steam bans.

What pisses me off is the arrogance and ignorance of that mod. No room for a maybe. “Maybe he geniunely wondered why there was no flag”. “Maybe send a warning before banning”. What the fuck?

I will not change my ways because of that, and I’m pretty sure not one else will. So what’s the point.

How likely is it that I’ll ever buy a Bethesda product now? I’ll tell you how likely, not at all. That company will never see a single cent from me.

How likely is it that I’ll ever buy a game on Steam or a key that can be redeemed on Steam? I will never again spend a single cent that goes into Vavle’s remote direction.

We have laws but those laws don’t work on Steam because? Private property? Since when does the law stop at someone’s private property? And it isn’t even private. It’s public and the defacto monopoly in the games world. The only game selling platform that has some sort of public community, no matter how terrible it is. But they’re also not selling games, they’re selling game licences and employ questionable practices to circumvent EU law.

Both platforms, Steam and Epic have this checkbox that you waive your right of withdrawal that you have when buying something online. In the EU you have the right to return anything you bought online in a timeframe of 14 days, expect that the EU is a corrupt institution and had passed an exception, no doubt bought by Valve, in the year 2011 that if you have a [x] checkbox saying that the customer waives their right of withdrawal before the purchase that they actually do.
Usually whatever is written in electronic form hold no value in the real world in at least Germany. But the EU is above German law and corrupt to the bone.

How can a company like Valve that is registered in the US not be held accountable by EU law? What corrupt bullshit is this?

I will not be the 1st or last to be permabanned from Steam. It might take a generation if we don’t hit nuclear winter before that but there will be more and more people affected by this arbitraty, faschist company and their illegal rules.

Hey I have nothing better to do and I’m willing to start a fundraiser to pay an interested law firm to sue Valve and Bethesda.

Please let me know if you’re interested, also if you’ve been banned from Steam let me know as well.

Day 3 I lost sleep over this crap.
I wouldn’t mind if I really did something bad that was worth punishing, but I didn’t. All I did was ask if there was a straight pride flag since all the unusual and mysterious sexual orientations got one.
I didn’t discriminate against them, but I am being discriminated for being the majority?

About a month ago I created an Against Valve Forum because I was unhappy with the business practices of this evil faschist capitalist corporation.
If you’ve ever been wronged by Valve, I invite you to join.
Let’s discuss how we can take this Goliath down.

Oh, and the red “You have an account alert” in the Steam client will serve me as a permanent reminder to never spend a single cent on this dispickable company of faschists again.

Update 22.05.2022: For whatever reason, the ban was apparently lifted. I logged in tonight and there was no red alert box and I was not banned from the Steam community. So thanks I guess. I still have a bitter taste in my mouth thinking about all this.

This site uses Akismet to reduce spam. Learn how your comment data is processed.